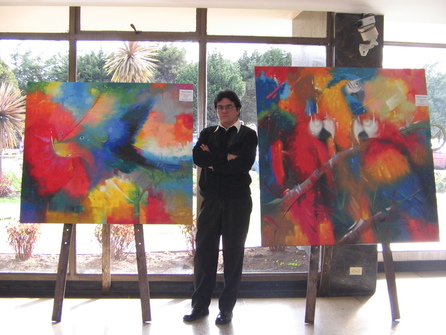 Tibu has a history of oil and jungle in nature. Bordered by Venezuela, and embedded in the jungle of Catatumbo, hence the preference of the artist’s painting of the Colombian nature with pride.

“Oil on canvas in mixed media.

I paint the nature of Latin America, including Colombian objects;

The colors of the jungle, parrots, condors, eagles, birds and butterflies qualified with indigenous necklaces, bamboo, cane, corn and bushes.

I paint a school of the islands Gorgona with a branch of Colombian coffee on the seabed.

And although Colombia weeps blood, I would not depress the outside world with our misfortune; as an artist I am the bearer of messages and sensations.

I do not like the roasted siena of dried blood, I prefer the red vibrancy of our coffee beans…….Ortega Toscano

University National of Colombia: 2001-2002- Techniques, color and artistic talents in the area of oil painting.

Collective with the group “ Romero Rafts” of Bucaramanga, Colombia

May 26, 2007- Circle of Officers of the Armed Forces, Bogota, Colombia

June 1, 2006- June 30, 2006- Hotel Tequendama Bogota, Colombia “Painting Colombian Condor” was selected to the collection of Tourism and Cultural Heritage of the Nation.